Podcast: At what point could I change lenders? 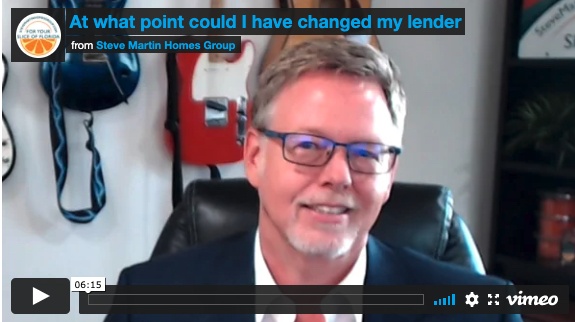 ( For the hearing impaired: Transcription below by artificial intelligence software - errors are inevitable)

You don't know what you don't know. I'm Steve Martin Smith, and I'm here to help you know it, at least when it comes to real estate. Now, if you find this information helpful, you may want to explore more of our videos and podcasts at SteveMartin HomesGroup.com. Now on with today's topic...

At what point could I have changed my lender? That's a question that was just asked to me last week. I realized the importance of having this discussion, because this particular buyer should have asked me this question about a month ago. Instead, he went through the entire process, ended up paying $200 more a month than he was told he was going to have to pay, had to deal with a lender who spoke to him in a condescending manner, had to go through an extension that was completely not necessary had the lender asked for this particular thing to be done three weeks earlier and they should have known that they were going to have to do this. So I'm saying all this to paint the picture that this was not a great experience for this buyer.

I'm going to tell you a little story, probably take just a few minutes, I'll keep it as short as possible. At the end of this, hopefully, you'll have a good understanding of what to do if you ever find yourself in a similar situation, or you have a friend that's talking to you about their situation, because it's really not hard.

As we were about a week under contract with this buyer, he realized that he didn't not appreciate the way he was being spoken to. It's funny because at the same time, Katrina and I were having the same thoughts. But you know, just being the real estate professionals, we did not say anything to anybody. We're like, okay, we'll just get through this. We'll make sure we never recommend this lender, we've never heard of them before. It was the buyer's choice to use this lender. So it was what it was. But then as the other things kept compounding, and we finally get to the closing table, and he sees that, "wow, I'm now paying $200 more monthly than I thought I was going to have to. I'm really disappointed, what could I have done".

So this is what I told him. If you find yourself in a situation where you're under contract, you've already given your deposit, you don't like your lender, and you want to switch immediately, have the conversation with your Realtor. Because like in this situation, this buyer assumed incorrectly, that he was committed to that lender because he had made that deposit. So I explained that the deposit isn't the lenders. That's your money that you're paying for your house. It goes to the closing agency. They're the ones holding on to it, the lender has no rights to that money. So there's no commitment there to the lender whatsoever. Your contract commitment says you have to close by a certain date. That's what you have to be focused on is getting the closing done.

So had you come to me a few days, a week or two, it probably could have very easily been switched over to a lender that I would recommend you that I know that I can trust. Because there's several lenders in town that I've done a lot of deals with and watched customer after customer be very satisfied in their experience. I have great relationships with these lenders. So if I call him up and say, Hey, I kind of need you to save the day here, do you think you can do it, they'll be honest with me, and there's a really good chance that they'd be able to. So as long as we can keep that same closing date, it's an easy switch. You just make the switch and get it done. If you've gone too far into the contract to closing period, and the new lender that we're talking to says, "you know, I can't commit to that closing date, I think I might need it another week past that". Maybe it's going to be a few days, but it's going to be 10 days, I don't know. But whatever it is, we take that information and we go to the seller, and we explain the situation and say hey, is there any chance you would be okay with doing a closing date extension, so that the buyer can switch lenders, and we can get this deal done more smoothly. There's a really good chance, you know, that the seller would be okay with that unless there's some major time constraint for them that they're dealing with. Like in this particular case, it was a vacant home the sellers were already in another house. They were a nice understanding couple, I'm sure that they would have been fine with doing that extension, and so he could have saved all that aggravation had he just said something earlier. So bottom line is if you find yourself in a situation, don't hesitate, talk to your Realtor.

Now if you feel like your Realtor isn't giving this the seriousness that you feel it needs. Unfortunately, you could find yourself in that situation. You still have the right to go to another lender, you can talk to other people talk to other lenders, see if you can find somebody that will still commit to that closing date. Or, again, maybe a little bit past that and then you go back to your Realtor and say look, I'm changing lenders, this lender says he can do it by this time, so there's no problem or I'm changing lenders, this lender can't do it for four more days so we need to request an extension, because that's, that's just what I'm doing. Alright, you can try that and see how that works for you. Again, it's going to be up to whatever Realtor that you chose, so choose your realtor wisely. It's going to be up to them to help you get through this because you might need some changes in the contract addendums and whatnot, and you're going to need them on your side for that. So try not to make them mad. That's all I can tell you on this topic, remember, Steve Martin Homes Group, for your slice of Florida.